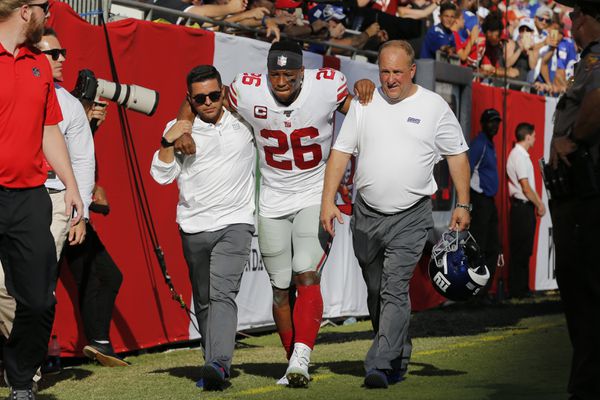 Hand raised, I own Saquon Barkley and by default, a miserable Monday morning.  In my League Of Record, we determine draft order by where you finish the prior season, with the advantage actually going to the Champion.  That was me.  I chose to select #1 overall and as a Giants fan I had made up my mind immediately: it was Saquon Barkley.  I had the chance to watch my best player wearing my home team’s uniform for 16 weeks and enjoy every minute of it.  Every cut, every 60 yard TD run with Madden Level jukes built in.

Now I sit here, aboard a NJTRANSIT train absolutely miserable trying to figure out what the fuck to do with my team and life in general. Saquon cannot be replaced.  You can replace a wife, but you can’t replace a Saquon.  It’s impossible.  For me, I play in a 16 Team format, so the best RB available currently is Jalen Richard. I’d rather eat paint.

Nonetheless, I must answer to the occasion.  As my league’s fighting Champion I must set an example.  I have put together a few contingency plans, all taking into account a wide number of variables, but most importantly: Record, Points, Roster Construction and Length Of Injury.

⁃ If you’re 3-0, you can afford to hold. With how much luck is involved in fantasy, the likelihood of you completely losing this win column advantage is unlikely.  Saquon is young, so there is a chance he returns earlier than expected.  You can hold, and try to pull off a few wins to get into the playoffs (or at least until Saquon is back).  Why? Because the likelihood of you getting fair value at the moment is #notgood, especially since we’re at the beginning of the recovery process. Hold strong and look to exploit matchups in the RB slot where you can.

⁃ If your record is 0-3, you may want to explore trading Saquon knowing that his return is guaranteed, thus insuring his value at a high price. Saquon is beyond what some people would call a league winner, however, you must get the correct value back.  The 3-0 team should be able to continue to win even without his services.  They should pay for that long term investment.  If you drop to 0-4 though, you’re playing Daily Fantasy and will need to sell for the best possible lineup for each week moving forward.

⁃ It’s too early to make a rash decision unless someone is willing to overpay with top dollar. Having a win is priceless, because it’s Fantasy’s undisputed top currency. What you need to do TODAY is wait for the MRI results, access how long Saquon will be projected to be out, and then evaluate your team. If you do not have adequate fillers (since Saquon was your best player), then you should look to build around using other assets.  Trade for a high end QB or look for players with very high ceilings to offset the normal 20 PPG that will be missing from your lineup.  You must take chances.  Going to players that have “good floors” probably won’t cut it in the short-term.  You need to hit big and well, get fucking lucky to be honest.

OPTION 4: HAVE FAITH IN THE WAIVER WIRE

⁃ I actually picked up Wayne Gallman prior to the start of the game yesterday.  I don’t know what made me do it, maybe it was Devine intervention, but nonetheless, I now have Saquon’s apparent handcuff who has .01 of his talent.  It’s better than not having him though, and if you don’t, I’d invest big time in the waiver wire as the Giants offense looks much more enticing with its new QB, rookie Daniel Jones.  If there’s one thing I can guarantee, it’s that Wayne Gallman is NOT be the focal part of a defensive gamplan.

OPTION 5: YOU’RE IN A SHALLOW LEAGUE SO STOP COMPLAINING

Of course, if you’re in a shallow league, you won’t have this big of a problem. You probably have a backup running back sitting on the bench (i.e. Matt Brieda or Mark Ingram) and you can easily plug them in.  Must be nice.

For us in deeper leagues, time to pray.